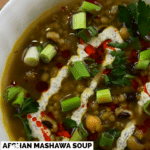 Have you been in the mood for trying a new soup that is hearty but healthy? Well, Afghans have a soup for you: Mashawa. I make mine vegetarian here. There is something so satisfying about a soup that will fill you up without slowing you down during the day.

This soup has all the Afghan recipe regular ingredients such as chickpeas, dill, yogurt, onions, and coriander. Just Americans love to top their chili with sour cream, we often top our dishes and soups with yogurt. Yogurt is nice because it is not as gloopy as sour cream and usually it is more healthy.

Some people insist that they need meat for dinner but you can change their mind with Mashawa. If you are ever in New York City, there is a wonderful Afghan food truck called Nansense. They have so many delicious items. Look how the New York Times describes their mashawa:

One last dish is mashawa, a soup thick as stew and built for winter. Mung beans, black-eyed peas and chickpeas are softened and fused with rice, carrots, turnips and potatoes. It’s suffused with dill, which adds an unexpected sunniness. With each spoonful, I felt like I could walk a hundred miles — or sleep for hours.

Mashawa is a soup that will appeal to anyone in your group. Make a large pot of this on a rainy day and you will have some very happy guests. If you try this and love it, you should try our other soup recipes for shorwa and aush. Shorwa is a bread soup, how cool is that?

Shorwa is perfect for a cold day. Like many of the other recipes, it can be adapted to your taste and to what you have around the house. View the recipe as a template. If you are new to cooking, start by following the recipe for this vegetable soup exactly, then when you feel more comfortable, change it up.

salt and pepper to taste

I make this dish when I have dried beans I need to use up but that aren’t enough for a whole dish on its own. So, in the video below I used a mixture of black beans and black eyed peas, and red split peas (which took only a few minutes to cook.)

We use cookies on our website to give you the most relevant experience by remembering your preferences and repeat visits. By clicking “Accept”, you consent to the use of ALL the cookies.
Do not sell my personal information.
Cookie settingsACCEPT
Manage consent

This website uses cookies to improve your experience while you navigate through the website. Out of these, the cookies that are categorized as necessary are stored on your browser as they are essential for the working of basic functionalities of the website. We also use third-party cookies that help us analyze and understand how you use this website. These cookies will be stored in your browser only with your consent. You also have the option to opt-out of these cookies. But opting out of some of these cookies may affect your browsing experience.
Necessary Always Enabled
Necessary cookies are absolutely essential for the website to function properly. These cookies ensure basic functionalities and security features of the website, anonymously.
Functional
Functional cookies help to perform certain functionalities like sharing the content of the website on social media platforms, collect feedbacks, and other third-party features.
Performance
Performance cookies are used to understand and analyze the key performance indexes of the website which helps in delivering a better user experience for the visitors.
Analytics
Analytical cookies are used to understand how visitors interact with the website. These cookies help provide information on metrics the number of visitors, bounce rate, traffic source, etc.
Advertisement
Advertisement cookies are used to provide visitors with relevant ads and marketing campaigns. These cookies track visitors across websites and collect information to provide customized ads.
Others
Other uncategorized cookies are those that are being analyzed and have not been classified into a category as yet.
SAVE & ACCEPT